New Books for the Stacks 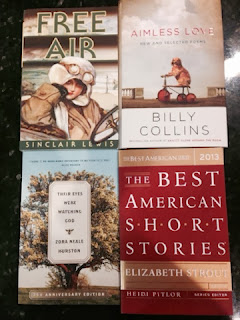 It began in the most predictable of ways: a mother walking into a book store on an errand for her child: to procure the next book in an engrossing series. Before  the object had been secured, her eager arms had begun to fill with Happy Thoughts (a book of poetry) and Lofty Ambitions (a compilation of short stories.) In a frantic rush to escape the tantalizing temptations, knowing they would soon become relics of wishful thinking, she managed to exit the store with a mere four books more than the one she had entered to find.

Yeah, so, that was me today.  I don't hold much hope that I'll really be able to plow through that book of short stories (short stories often take me longer to read than long stories) any time soon...but I like to think I will.  The only one of the four I'd already been considering was Aimless Love, but then the fact that I've never read Hurston or Lewis seemed unfathomable...so those book jumped into my arms too.

Who can resist cover art like that on Free Air?  I want some driving goggles!  I'm listening to Upton Sinclair's "Oil" on Audible, and somehow the idea of reading two different Sinclairs at the same time makes me happy.*


*My interest in Sinclairs might be due to that being my younger brother's middle name.  He is named after an author...but my mom can't seem to remember exactly which author.  Maybe after reading these two books I'll just decide!)
Posted by Melody at 7:17 PM