I had so much fun focusing on reading yesterday. I haven't done that since third grade when some kindly neighbor promised to pay a quarter for each page I read and then went apoplectic when they found out how much I'd read.

Yesterday I finished four books and got halfway through another, which equaled out to about 975 pages spread over about 15 hours. I also managed to make pancakes, roast a chicken, drive my 15yo to a friend's house, and have numerous meaningful conversations...there's something about seeing mom sitting alone, peacefully reading a book, that makes teenagers want to talk. It's fabulous actually; I love that my kiddos want to talk to me.

So, I got some pre-reading done for my 11yo, as well as knocking off a couple others. My favorite was definitely Did You Ever Have a Family and my least favorite was probably Poppy. Or Right Ho, Jeeves.  They were both good, just not as great as the first two. Tuesdays at the Castle is fantastic so far.  I just love how Jessica Day George writes. Her Dragon Slippers series was wonderful.

I'm so thankful for all the time and effort that went into running the readathon - I had no idea! In fact, I only found out about it the day before it happened, but that won't happen again. I'll be on top of it in the spring, and hopefully I'll have another blissfully empty weekend coincide with the date.
Posted by Melody at 11:00 AM 3 comments:

I'm so excited to have found out about Dewey's 24-Hour Readathon just in time!

My blog has been bare bones for a while now, and now that my home remodeling project is just about complete I'm very ready to build more book-blogging-friendships. What better way than through a readathon? This weekend happens to be a rare low-key weekend for me: perfect timing. 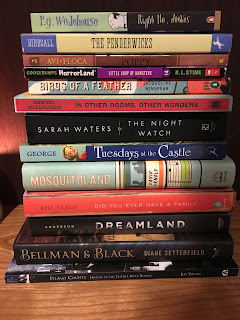 I pulled out a bunch of possibilities for reading material, focusing on lighter reading as well as a few I need to get read sooner rather than later (a couple pre-reads for my 11yo, and my next book club pick).

Since the readathon officially began at 5am Pacific Standard Time, an ungodly hour for a long-awaited Saturday, the first part of my day went like this:

Now heading into Hour 6, it's time for me to make some coffee and get serious about settling into a book.  And charging my laptop.

I'll be balancing out my first read with the new Indiespensable pick from Powell's Books: Did You Ever Have a Family by Bill Clegg.  So far, (just barely into it,) I'm enjoying my first readathon!

Sneak Peek at my New Library

Last weekend I loaded my car absolutely to the brim with books. It was so exciting. After three years in storage, it was finally time to start reacquainting myself with my old friends.

My library cabinets had been installed but not yet sealed, so I was jumping the gun a little bit, but I reasoned that there was organizing to be done anyhow. I was curious to find out how many of my books I'd no longer care about after not having seen them in quite some time. In the end, combined with homeschooling books I no longer needed, I got rid of 4-5 boxes of books.  Even so, my kiddos are pretty sure there is no way all of these books will fit on my shelves.


I've had a lot of time to think about how I want to organize my books, and I've settled upon a combination of chronology and topic. Most of my books, (fiction/nonfiction, kids/adults,) will be displayed according to the time period it was written or set. The rest will be grouped into topics or genres (poetry, junior fiction, gardening, etc.)

Sorting my books into all these groups was quite an eye-opener. I lean heavily towards mid-19th century and early 20th century, and have pretty slim pickings for pre-18th century and post-1940s. It'll be interesting to see how that looks when they're up on the shelves.

I had my shelves built out of cherry, with no stain. I love the look of natural cherry. Our house has a lot of walnut, and I wanted the library to feel a little brighter, like golden sunshine. This is one of the few rooms of the house that doesn't have open beam ceilings, and existing windows meant my shelves aren't too tall. Many people seemed pretty sad that I don't get a library ladder, but I'm not. To be frank, I want all my books within arm's reach.  Otherwise they are just decoration and that's not really my style.


I can't wait to toss those boxes and see my books on my shelves. A nice reading chair in the corner nook and an inviting seating area in the middle of the library will make this room my favorite part of our home. How could it be otherwise?
Posted by Melody at 1:31 PM 3 comments:

For the Record: September 2015

What a relief to be back in a routine. It hasn't been easy to focus on schooling when we still have workers in our house every day, but the end is in sight.  After another week or two, we should have our home back to ourselves.  It's only been three years. Yikes. (*big sigh of relief...or was that just exhaustion?) My library cabinets are being oiled and all the loose ends are being tied up; pretty soon the only problem with my house will be that it is located in Southern California instead of Northern California! (I actually don't mind SoCal but I'm a NorCal girl and I miss it So Much.)

2 Classics:
- The Optimist's Daughter, Eudora Welty (4.5) What a beautiful portrait this small book is! Full of Southern manners and culture clash, family dynamics and truth, this is a book that I already want to read again. There isn't much plot, but as a character study and observation on life, this has it all.
- Flowers for Algernon, Daniel Keyes (4) Before reading this book I was pretty certain that I wouldn't like it. It seemed too tied to an agenda to be enjoyable. Of course I was wrong. I did have a hard time getting into it at first (probably because of my preconceived ideas) but it was written so well and plotted so perfectly that I ended up being won over. This read happened to coincide with Banned Books Week: happy accident.

2 Other/Fiction:
- Go Set a Watchman, Harper Lee (4) I had decided to not read this book. Not because I loved To Kill a Mockingbird so much, but because I didn't love it enough to warrant reading a subsequent book. I'm glad it was picked for my book club though, because it ended up being the perfect companion novel and helped me appreciate Mockingbird more than I did before. Where Mockingbird felt polished, clean, and purposeful, Watchman felt raw, pointed, and passionate. I don't think the characters were portrayed with different personalities, rather with a different perspective. Very interesting read, and wonderful discussion in my book group.
- The Story of Land and Sea, Katy Simpson Smith (3.5) Though I usually enjoy books that focus on the characters and setting more than the plot, this one was the exception. I found myself skipping over descriptive passages trying to find the story. It was an interesting look at America during the time of the Revolution, as it didn't focus on the war as much as most novels in that setting would tend to do.

4 Junior Fiction:
- Pedro's Journal, Pam Conrad (3) A fictional journal of a boy on Columbus' first journey, this was more about the history than the entertainment.
- Flora & Ulysses, Kate DiCamillo (4) This was an entertaining little story of a squirrel with super powers and the girl that needed him in her life.  My 11yo is reading it and is also entertained with the intelligent humor and addition of drawings and comics. It's a cast of oddballs, which somehow makes it more realistic.
- Walk the World's Rim, Betty Baker (4) Really interesting history here! I've had a hard time teaching about the explorers and conquistadors without feeling like it's a bunch of names and dates that don't matter much. This book does a wonderful job at introducing many cultures, geographical locations, and historical events in a very simple manner.
- Om-kas-toe, Kenneth Thomasma (3) Although this was an interesting picture of the Blackfeet Indians, their lifestyle and introduction to horses, the writing was kind of terrible. It would have been more interesting, perhaps, if the reader had some familiarity with modern day Montana and was able to identify the locations the author mentioned. As it was, the continual interjections of commentary into the story made it harder to stay focused.

- A Walk in the Woods, Bill Bryson. My current audiobook. Isn't this being made into a movie? Usually I like to watch a movie before reading a book, contrary to most readers, but this seemed like a good one to read first.
- Wolf Winter, Cecilia Eckback. This story is pretty intense! I suppose it could be classified as a crime mystery, but it so thoroughly feels like I've been dropped into 1717 rural Sweden that I can't help but think that this is exactly what historical fiction should be.
- Justin Morgan Had a Horse, Marguerite Henry. Current read-aloud to my 11yo daughter. The accents written into the dialogue make this a fun read.

On My Nightstand:
Since unpacking my books, I kind of just want to read everything immediately. The plan, though, is to alternate some of the books that have been on my nightstand forever with some of the new books I've picked up. So, next up is The Big Burn by Timothy Egan followed by The Night Watch. We'll see where I go from there.