A major reading slump this autumn has made a dent in reaching my reading goals, but I'm gaining speed and refocusing now—albeit with slightly different priorities (but that discussion will have to wait for another post.  I'll be talking about goals and all that stuff soon.)  One thing that is always a priority with me is the list and the stats.  I love stats.

Old/New?
OLDEST? Mary Shelly's Frankenstein, 1818 (it was all right)
NEWEST? The Colour of Milk by Nell Leyshon (it was wonderful)
# WRITTEN BEFORE I WAS BORN? 24
# WRITTEN THIS YEAR? 9

TOP FIVE of 2012: (excluding recent re-reads, notably Song of the Lark, and determined by the very un-scientific method of deciding which ones loomed largest in my memory.)

Cutting for Stone by Abraham Verghese (all around wonderfully done)
A Monster Calls by Patrick Ness (incredible story-telling)
Unbroken by Laura Hillenbrand (fascinating biography!)
How Green Was My Valley by Richard Llewellyn (heartbreaking characters and setting)
Hell and Ohio by Chris Holbrook (incredible, deceptively simple writing)

and a comparison chart just for the fun of it-- 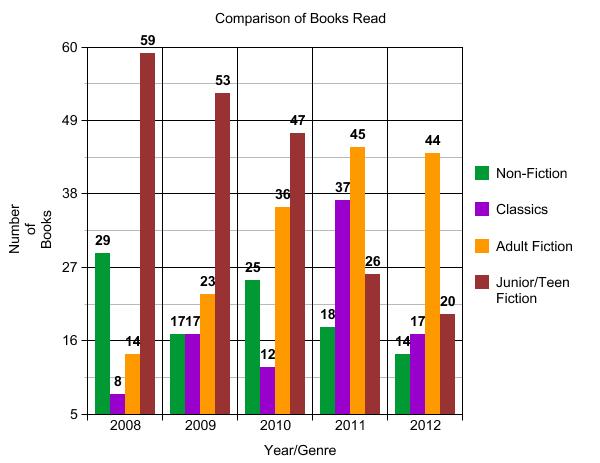 The most notable change in my reading in the last 5 years is the shift between Junior/Teen Fiction and Adult Fiction.  This is due to 2 factors:  first, my kiddos are getting older so I have more available brain cells to be able to handle more complex literature; and second, I'm not homeschooling as many of kiddos now, and so I don't need to be doing the amount of pre-reading and reading-aloud that I was doing before.

Other than that big difference, I am also showing a slight decline in Non-Fiction reading (although it should be noted that 2008 Non-Fiction was mostly on the Junior level).  This explains why I've been craving it more!

Email ThisBlogThis!Share to TwitterShare to FacebookShare to Pinterest
Tags: Year in Review