I've just realized that I consider things to be bookish even if they are decidedly not literary.  Have you ever found yourself doing that?  Many forms of artistic expression give me the same thrill that an amazing book might, and thus I lump them all together in one wonderful bunch of inspiration.

Film.  I love watching indie films because they tend to be unique: there is more emphasis on artistry and themes than on general appeal.  Quite similar to literary fiction, in fact.  In the best circumstances, a film will leave me thinking for days, amazed and awed.  In the worst circumstance, well...at least it was different.  Last night I watched Melancholia with Kirsten Dunst, a new film by Lars Von Trier (who also wrote & directed Dogville with Nicole Kidman, another film I found fascinating).  Melancholia was simply incredible.

To put the plot simply: Two sisters find their already strained relationship challenged as a mysterious new planet threatens to collide into the Earth. (thanks IMDB) (check out a longer synopsis here)  It is saturated with art, from the almost-still shots in the beginning sequence (set to classical music...all of which adds up to something surprisingly non-boring) to the beautifully immense grounds that it was filmed on (which made it feel almost like a period piece...except it wasn't), to the incredible closing shots: the eye never gets bored.  This film has depth: themes, symbolism, stuff-to-think-about.  It kind of made my brain explode, and now I want to read the book.  Except there isn't one.  Watching the movie is reading the book.  (See? Non-literary bookishness.)

It's slated to release in the States on 11/11/11, (we watched it on Apple TV,) although I imagine the release will be limited.  However, if you are intrigued by the preview, you should find a way to watch the film.  It's stunning.

Modern Design.  I'm lucky enough to live in a spectacularly unique example of mid-century modern architecture.  We'll soon be beginning some renovations--a face lift mostly, bringing it up to date--and I find much to be inspired by in my design research.  I get all excited by an amazing design: the art & inspiration in architecture or furnishings being only another way to express an interest in how we live, an appreciation for what is around us.  This real-life inspiration is what links me, the reader, directly to an author.  It is more than comprehension; it is a different level of understanding and communication. 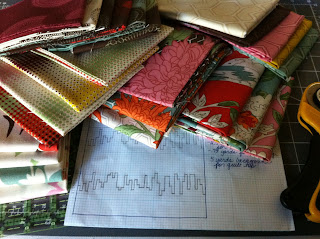 Quilting.  I know:  what??  Like in Little House on the Prairie?  Yes, it is a homespun, domestic sort of art form, but I love it.  I just designed a quilt for my modern bedroom, and the incredible fabrics and fun design just leave me full of happiness.  In my quest for a quilt design that wouldn't look out of place in my house, and with some input from my math-loving-husband, I've come up with a visual representation of the first 50 digits of Pi.  Weird, I know.  But also exciting in a geeky-intellectual sort of way.  My husband is convinced he'll get smarter by osmosis.  I'm getting ready to cut into the fabrics...I'll keep you updated on this one.

I'm seeing a theme here: I equate books with happiness and everything wonderful, therefore anything wonderful or happy must be related to books somehow.  That totally explains why I'm always tempted to blog about non-bookish things as if they were books.  What things in your life are as wonderful as books?
Posted by Melody at 7:09 PM